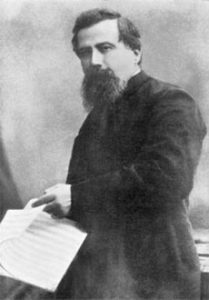 Ponchielli is not one of your mainstream composers.  Italian born in 1834, he
is most famous for his opera Gioconda – from which our arrangement above is taken.

He won a music scholarship at the Milan Conservatory at the age of nine and wrote his first symphony at twelve followed by his first opera two years later.

His early career was disappointing taking many small jobs after being manipulated out of a position at the Milan Conservatory.  However, he gained much experience as bandmaster arranging and composing over 200 works. He married and had one son.

In 1872 he gained a contract with the music publisher G Ricordi and Co, the musical establishment at the Conservatory and La Scala after his success of his revised version of I Promessi Sposi.  His following opera  I Lituani was also very popular and was performed in Saint Petersburg.

La Gioconda was composed in 1876 and was Ponchielli’s most famous opera.  Following this he worked on I Mori di Valenza but never completed it.  It was later finished by Arturo Cadore and performed after the death of Ponchielli in 1914.

Why not play one of his pieces from our website to celebrate!
www.music-scores.com/mozart/composer.php