I woke up this morning to the welcome sight of sunshine outside the window as opposed to darkness… Spring is hopefully on its way!

Julius Fucik is not a composer’s name that many are familiar with and maybe this is due to the type of music he composed.  With a background in the military most of his work was for military bands.  He composed over 400 military marches, polkas and waltzes. He was born in Prague in 1872 and died at the age of just forty four in Berlin in 1916 due to ill health at a time when his band and music publishing company were failing due to the affects of the First World War.

His two most famous pieces are the ‘Florentiner March’ in 1907 and in 1901 the piece that we have on our blog today;  ‘Entry to the Gladiators’ also known as ‘Thunder and Blazers’ and ‘Grand Chromatic March’.  This arrangement became popular as a Screamer march, which is circus music to introduce clowns and stir up the crowd. It is also played for rousing concert performances, as in Last Night of the Proms. 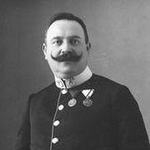