Four new arrangements have been added to the site this week

Le Coucou was one of Louis-Claude Dacquin’s most famous works.

Dacquin was born in Paris of Italian descent and Jewish ancestry.  His keyboard ability was noticed at an early age>  He performed for the court of Louis XIV at the age of six, by twelve he was the organist at the Sainte-Chapelle, and thirteen at the Church of Petit Saint Antoine. Throughout his life he was never short of work as an organist and in 1739 in became organist to King Louis XV and in 1755 he was made titular organist at Nortre-Dame Catheral.

His work was noted for its unfaltering precision and neatness.  This reputation drew large crowds . 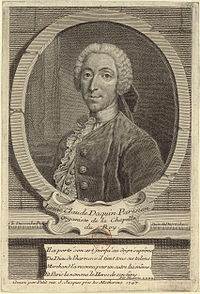 This week Anne has added three new arrangements from JS Bach & Henry Purcell for the Harpsichord.

This week Anne has added three new arrangements to music-scores.com for the Harpsichord from Bach and Purcell.
View on Facebook
·Share