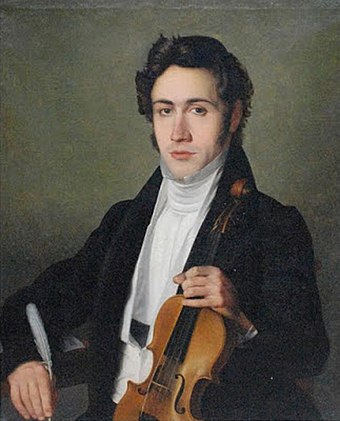 Niccolò Paganini was an Italian violinist, violist, guitarist, and composer.  Born in Genoa in 1782, he was taught by his rather strict father – apparently if he didn’t complete the required number of hours practicing he was not allowed to eat!

At the age of six he received lessons from some of the best teachers in Genoa, and by 1790, at only 8 years old,  he performed and composed his first sonata.  Touring extensively he became a very well-known violinist and also that of  a womanizer and gambler.  At one point he even had to pawn his violin.

Despite his womanizing Paganini fell in love with singer Antonia Bianchi and for 15 years devoted himself to her.  They had a son to whom he was very close, often taking him on tour.

During his life Paganini was no stranger to chronic illnesses and on 27 May 1840 he died from internal hemorrhaging. Prior to this he had returned to Paris to set up a Casino which failed and led him to financial ruin and resulted in him selling pretty much everything including his instruments.

Many people believed his mother sold his soul to the devil in exchange for a great career …. consequently after his death the church refused to bury him…. it took his son 36 years to finally find him a resting place in Parma.

This is great! However I do hope the whole block of flats enjoy his playing ... either that or they have soundproofing!