Johannes Brahms was German composer and pianist, born in Hamburg.  Such was his presence that he is often grouped with Bach and Beethoven to be know as the ‘Three B’s’ 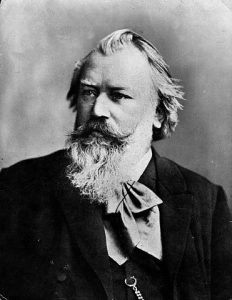 At a young age his piano teacher was known to have said, “he could be such a good player, but he will not stop his never-ending composing.”   His parents disapproved of his early career in composing feeling that he would be much better off as a performer… It’s a good job that we don’t always listen to our parents!

Brahms met Joseph Joachim in 1853 and his musical career reached a turning point.  Joachim consequently introduced Brahms to composer  Robert Schumann to whom Brahms became a great friends with until Schumann’s death in 1856.

Sadly Brahms view of love was very much shaped as a young boy and as a result his relationships never progressed.  Growing up his parents had a loveless marriage that combined with his first job at the age of twelve playing in a brothel where he saw and experienced unpleasant things consequently lead to confusion when it came to love.

At the age of twenty five as well as being a rising music star he fell in love with Bertha who sang in a choir that he conducted.  They spent a lot of time together and she used to sing  a Viennese song to him.  Brahms emotional struggle resulted in him ending the relationship.

Ten years later he saw a pregnant Bertha with her husband and child, he felt sadness, longing and loss on what could have been.  As a gift to celebrate the birth of her son he wrote Brahms Lullaby, between notes you can hear the song Bertha used to sing to him. She named her son Johannes.  Most people will know or have listened to this lullaby at some stage in their lives, I remember playing it to my children when they were babies in attempt to soothe them.

Today the song is still widely used, and will remind people of different scenarios be it a film, place or memory,  to me it is the tune my old wind up jewellery box played as the ballerina twirled around (now I am showing my age!).

Brahms also fell for Clara Schumann the wife of his very good friend Robert Schumann and a well known pianist (more so than Brahms).  In 1853  Robert became mentally ill and ended up in an asylum.   Brahms moved in with Clara and her children to support them, and their feelings for each other became apparent.  However both were racked with anxiety and guilt over their feelings for each other.  Robert died in 1856 and Brahms and Clara were free for their relationship to progress.  However after a holiday in Switzerland Brahms returned to Hamburg – no one knows what was said on the holiday leading to this finality of their relationship?.. He wrote Op. 121 on her death in 1896

After Clara he exchanged rings with a singer called Agathe, but then sent her a note: “I love you!… But I can’t wear chains.”  As expected Agathe then put a stop to the relationship but grieved for years. Brahms himself admitted: “I have played the scoundrel with Agathe.”

Brahms died age 63 after being diagnosed with cancer.