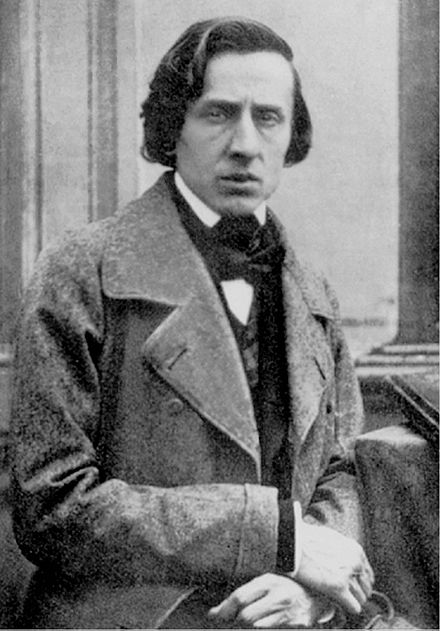 Frederic Chopin’s  father taught French and played the flute and violin and his mother played the piano giving lessons to boys at the boarding house they ran. Chopin wrote poetry and composed at an early age.

Some say that after listening to Niccolò Paganini play the violin in 1828 Chopin and composing a set of variations, Souvenir de Paganini; this led him to write his first Études (3 sets of solos), and perform piano concerts, receiving positive reviews.

In 1831 Chopin went to Paris and never return to Poland – well this is not entirely correct after his death his heart was taken to Poland and placed in the church of the Holy Cross in Warsaw.  Whilst in Paris he made friends with Mendelssohn, Berlioz and Liszt.

Chopin’s partner of ten years Amantine Lucile Aurore Dupin was best known by her pseudonym George Sand and also for her affairs with a number of artists.  On his first encounter with her he exclaimed ‘what an unpleasant woman’ –  He obviously changed his mind!  She referred to him as ‘Chop Chop’, ‘Chopinet’ ‘my little grasshopper’ and ‘Monsieur Velvet-fingers’ .  They eventually split up after a violent row in which Sand accused Chopin of being in love with her daughter.

Chopin wasn’t a well man, in addition to tuberculosis he had epilepsy which caused him to have vivid dreams of dead relatives and ‘damned creatures’ inside his piano.

He died at the early age of 39 probably from Tuberculosis.   As death was imminent, Chopin asked a young countess to sing the national anthem of Poland.  As she sung the last note he took his last breath.  He is buried near his composer friend Cerubini, at a cemetery in Paris.  Mozart’s Requiem was performed at his funeral.

Why not take a look at one of the 135 arrangements we have on our site:  http://www.music-scores.com/chopin/composer.php

For all of you who prefer cats to dogs..