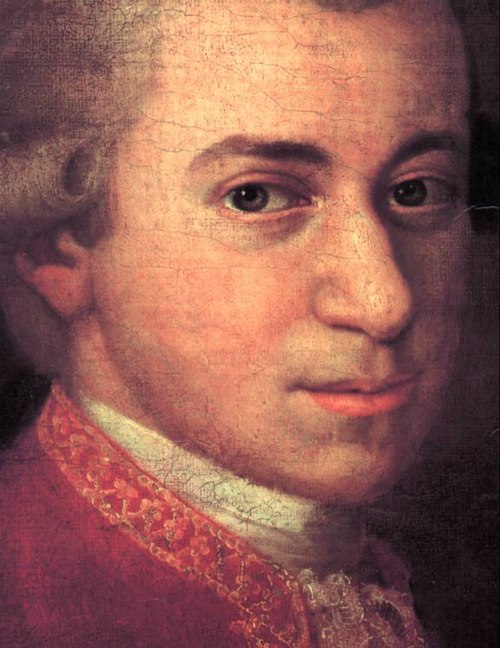 Mozart is one of the most popular classical composers.  If you ask anyone they are likely to know at least one of his pieces (even if they don’t know its name!).  He was born in Salzberg on 27 January 1756 and lived a short life spanning only 35 years.

Leopold Mozart was the father of seven children, Unfortunately only Nanneryl and Wolfgang survived infancy.

When Nannerl was 7, she began keyboard lessons with her father, while her three-year-old brother watched. After Wolfgang’s death, she reminisced:

‘He often spent much time at the clavierpicking out thirds, which he was ever striking, and his pleasure showed that it sounded good…. In the fourth year of his age his father, for a game as it were, began to teach him a few minuets and pieces at the clavier…. He could play it faultlessly and with the greatest delicacy, and keeping exactly in time…. At the age of five, he was already composing little pieces, which he played to his father who wrote them down.’

Leopold gave up his own musical career to educate his children.  Nannerl and Wolfgang showed so much talent that in 1762 Leopold took them on the road, however within a year Leopold put all his energy into his son.  He spent the next 14 years travelling Europe with him meeting composers, giving concerts and tutoring.  Leopold very much controlled his son’s life.

However this was the basis for Mozart’s incredible but unfortunately short career, during which his produced over 600 works.

Symphony 41 was one of his most famous pieces.

We have 307 arrangements by Mozart on Music Scores

For all of you who prefer cats to dogs..